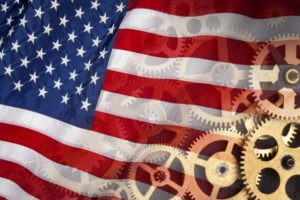 Americans hoping for a boost in the manufacturing industry during this calendar year are looking to their lawmakers for some bi-partisan cooperation. This is otherwise known as a goodwill gesture toward American workers for the coming years. Considering the frequent antics of our congressmen and congresswomen, this cooperation might seem a little farfetched, but with the passing of H.R. 2996 in the House, further cooperation might just be possible. H.R. 2996 is also known as the Revitalizing American Manufacturing and Innovation Act or RAMI.

The H.R. 2996 bill, co-sponsored by Republican congressman Tom Reed of New York and Democratic Massachusetts congressman Joseph Kennedy III, passed the House in September with bi-partisan support. A recent Forbes commentary by Karen Mills, a senior fellow at Harvard Kennedy School and Harvard Business School, questioned if U.S. lawmakers had the tenacity to work together on this important initiative as it waits within the Senate before lawmakers head home for the holidays. In the Senate, the Revitalizing American Manufacturing and Innovation Act (S.1468) is backed by Democrat Sen. Sherrod Brown of Ohio and Republican Sen. Roy Blunt of Missouri.

Each of these networks would work to unite colleges and universities; research institutes; government; and business and industry in a partnership to create a stronger and more vital U.S. manufacturing industry. Each of these manufacturing “hubs” would encourage the growth of supporting industries such as labs, suppliers, education institutions, and financing within the area. The investment incentive behind this initiative has particular impact when you consider that each dollar spent in manufacturing generates another $1.35 in additional economic activity, according to the U.S. Bureau of Economic Analysis.

Where They Go From Here

This makes the return from every dollar spent within the manufacturing sector larger than any other. The Revitalizing American Manufacturing and Innovation Act calls for an initial investment of $600 million that would be provided by the government through an investment in the National Institute of Standards and Technology. After seven years, further investment would come from private-funding sources.

Cooperation within the Senate still appear to be up in the air but from the perspective of a manufacturing company, we know that good business and satisfied customers are largely dependent on connecting with each customer on a technical level. Just as lawmakers from both parties involved in the Revitalizing American Manufacturing and Innovation Act will need to compromise in order to achieve the strongest solutions, CDMC relies on its alliances with other companies who specialize in different components of metal finishing. This allows CDMC’s experienced manufacturers and designers to create the best deburring solution for any application.