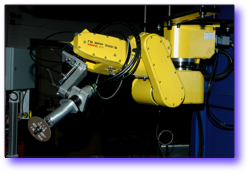 Throughout the manufacturing industry, the density of robots continues to rise around the world. Such technological applications help free up time for tasks requiring creativity and thought. According to the International Federation of Robotics, there is an average of 74 robot units per 10,000 employees. This includes the high end of 99 units in Europe, 84 in the Americas and 63 in Asia.

Countries by Level of Automation

Since 2016, robot density continues to grow, as represented by the United States’ No. 7 rank in the countries of automation list above. Robots have been part of ongoing efforts to strengthen the American market and keep manufacturing at home. The automotive industry leads the way in the use of robots and it’s anticipated that between 2017 and 2020 the use of robots will rise 15 percent each year on average, according to a report from the International Federation of Robotics.

Despite some fears of robots replacing jobs, robots are now a common scene in many factories as robots and humans learn to co-exist. One of the ways this is happening is through Robotic Process Automation or RPA. With technological similarities to graphical user interface testing tools, RPA tools can automate interactions with the graphical user interface. RPA can also mimic the task-based processes, speeding up repetitive tasks and freeing up humans for interaction and the application of intelligence, judgement and reasoning. With the potential to fully automate routine tasks, RPA can reduce the total cost of end-to-end transactional processes by 50 percent to 75 percent, according to an RPA release from The Hackett Group, a global strategy, operations and business application consulting firm.

Collaborations on the manufacturing floor also include self-navigating Autonomous Indoor Vehicles, which shift goods between workstations without the need for magnets or beacons. This joint work between human and robot was coined “cobot” by professors from Northwestern University and is being tested at Cornell Dubilier, a power manufacturer who is using robots to speed up the inspection of capacitor installations, doubling the speed of its labeling process.

The behind-the-scenes aspect of RPA translates into a variety of applications from supply chains, interactions between IT systems and repetitive business office tasks. Adoption will necessitate an increasing level of comfort for manufacturers concerning robotics and artificial intelligence’s. It remains to be seen how quickly companies will embrace these technologies, but such adoption has the potential to revolutionize the industry and the work of those employed within it.

This article is brought to you by The Cleveland Deburring Machine Company. CDMC can provide a deburring solution for gears, sprockets, aerospace and defense, automotive deburring, power transmission, powdered metals, fluid power and custom deburring applications. Our no-charge application evaluation includes a detailed report and process description in as little as 3 to 5 business days. Contact CDMC today and speak with one of our experts!