The State of American Manufacturing 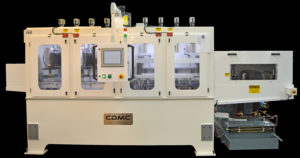 Every year, the President gives his State of the Union address, which broadly covers the state of affairs in the entire country as a whole for that year. But the State of the Union isn’t the only annual speech covering the state of affairs in a particular arena. This year, the president and CEO of the National Association of Manufacturers (NAM), Jay Timmons, delivered the annual State of Manufacturing address to a crowd in Houston, Texas. Employing over 250,000 people, Houston is America’s leading city for manufacturing, which made it an ideal setting for Timmons to talk about the future of American manufacturing.

Manufacturing in the United States is undergoing what many people have called a “renaissance.” Since the end of the recession in 2009, manufacturing output has increased 18%, and in 2012 manufacturers contributed $2 trillion to the national economy. After some hard years, many experts, including Timmons, believe that manufacturing is making a comeback. But there’s still room for manufacturing to grow. According to data from the Manufacturers Alliance, manufacturing can add 300,000 jobs a year and increase its economical contribution by an additional $1.5 trillion if manufacturing’s share of the economy rises from 12% back up to where it was at the beginning of the last decade, around 15%.

When talking about people, Timmons emphasized that manufacturing attracts dedicated people who want to make things and do work that matters. The challenges facing manufacturing in America relate in part to finding people with the right skills for the job. The State of Manufacturing address focused on STEM skills (science, technology, engineering, and math). In it, Timmons said that many jobs go unfilled because employers can’t find people with the right skill set.

Finally, Timmons talked about policy, focusing on regulatory reform, especially as it relates to energy, a subject that’s been a major topic of conversation as the government rules on Environmental Protection Agency (EPA) requirements relating to greenhouse gas emissions and affordable and sustainable energy practices. Since manufacturing uses 1/3 of the nation’s total energy output, energy regulation is an important subject for the future of manufacturing.

In spite of difficulties and adjustments to new policies and challenges in the global manufacturing environment, the prognosis for American manufacturing as outlined in the State of Manufacturing address was a promising one. Manufacturing is the backbone of the American economy, and at the Cleveland Deburring Machine Company, we know that in order to stay at the head of the game, manufacturers need to be able to depend on their tools, which is why we offer innovative, reliable, cost-effective deburring machines for all your manufacturing needs.