Is 3D Printing the Third Wave of Manufacturing? 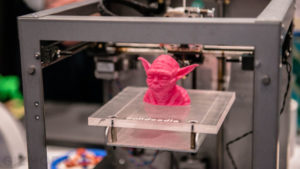 Here at CDMC, we are continually amazed at the manufacturing advances that once seemed almost space-age in nature that are now considered commonplace today. One of those advances, 3D printing, was recently mentioned by The Manufacturers Association to be one of the most high-impact developments for the future of manufacturing competitiveness in the United States, according to Randy Wolken, the president of The Manufacturers Association in Syracuse, New York.

Also known as additive manufacturing, where one layer is added on top of another, 3D printing is opening up new avenues of design and creation for small and large manufacturers to create prototypes in a quicker way with less material waste. 3D printing is used in a variety of industries for a multitude of uses including prototyping/CAD (computer-aided design), metal casting, design visualization, architecture, as well as in applications for education, healthcare, retail and entertainment. It would appear from this list that the opportunities to use 3D printing are endless.

The Economist magazine even went as far as to call 3D printing the third industrial revolution of manufacturing. The first revolution being mechanism in the nineteenth century and the second assembly line mass production. It would seem that the third generation certainly took longer in coming, with the first 3D printers coming into specialized use more than twenty years ago.

Despite two decades of application, the use of 3D printers has only recently become mainstream, primarily because of the drop in the cost of the printers. Advocates for the technology are applying the use of 3D printers in a variety of industries and use of the technology is also believed to have the possibility to open up manufacturing to more people and effectivity expand the definition of manufacturing. This could enlarge the concept of manufacturing far beyond the conventional idea of a brick and mortar building with assembly lines restricted to the production of a single item.

In addition to the ability to rapidly create prototypes with technology, 3D printing also offers a new outlook on the products and materials used in manufacturing, which in turn could offer more opportunities for the customization of products and services.

As a manufacturer of customized deburring solutions, CDMC knows the importance of supplying application processes that are driven by customer requirements that directly relate to each company’s individual needs and project goals. For example, our signature brush technique is a versatile and effective method of deburring. By employing a variety of brushes that vary in size, style and configuration, CDMC is able to create an optimal application that’s specialized to your company’s unique needs.

CDMC 1000 Series – handles the deburring needs for sprockets, gears and other parts